Mr. McClendon is a US Naval Veteran of the First Gulf War. He has lived in Richardson, Texas since he was 4 years old and only ever left to serve in the military. He has been in his current home for over 50 years! Mr. McClendon is both a Texas Veteran and a Veteran of Foreign War.

In 1989 Mr. McClendon enlisted into the United States Navy and worked his way to become an Electronic Technician on the NATO Seasparrow Surface Missile, attaining a rank of FC2. During his service in the First Gulf War, he earned: the National Defense Service Medal, 2 Battle “E” Ribbons, the Good Conduct Award, a Sea Service Deployment with a bronze star, and a Southwest Asia Service Medal with a bronze star.

Mr. McClendon served on the USS Ranger maintaining, operating, and repairing the Short Range Defensive Missile System. He was honorably discharged in 1995, after 6 years in service. As a civilian, Mr. McClendon used the skills he acquired in the Navy to further his education as an Electronic Technician. He spent his career as a Technician in Dallas until he was struck with an unexpected early retirement.

On June 26, 2019 Mr. McClendon was having migraines and feeling uncomfortable. Following his wife’s suggestions, he allowed her to take him to Urgent Care, where he was then rushed to the emergency room. What they there discovered was that Mr. McClendon had a bacterial infection in his legs, and was ten minutes away from dying — unless they acted fast. His doctor said that this was the most serious infection they had ever seen. He needed a double-amputee in order to save his life. After this procedure Mr. McClendon spent the next five and a half week coma, during which his wife did not leave his side.

After waking, he needed very intense rehabilitation to regain the muscles he had lost: It took weeks for him to be able to sit up in bed on his own strength. Almost one-year later, Mr. McClendon has regained nearly all of the motor skills he lost. He still visits his VA hospital frequently for rehab, and considers it his second home.

When asked how he has mentally transitioned to having a disability, Mr. McClendon said “I’m perfectly okay with it. I have a great relationship with God and I know for sure tat God brought me back for a purpose.” He believes that his life-purpose is to serve others. Being the beneficiary of so much help and support in the past year, Mr. McClendon wishes to provide those same gifts of hope and love for someone else.

Mr. McClendon is a very spiritual man who is deeply rooted in his church, United Disciples Christian Church in Richardson. His church elder, Jim, is who originally got him in contact with Habitat for Humanity of Greater Garland. Mr. McClendon was out of income for ten consecutive months, compiling unbelievable soars of home and medical bills while he recovered in the hospital. His church stepped in, here, to keep his family afloat. He was able to keep his home, security, and dignity because of his church. Mr. McClendon expressed his deep gratitude for those who have chipped in: “I have been so blessed by everybody. I can’t begin to name all the people who have helped me.”

Once Mr. McClendon sent in his application, HFHGG knew they could make a difference. The team went over to evaluate his living situation and were informed in detail of the leaking roof that had developed after a tornado hit the area in October 2019. The VA hospital, along with his church, had made a lot of progress in increasing Mr. McClendon’s quality of life by helping with medical bills, expanding the size of his bathroom door, and getting him in contact with Habitat. Beyond their great work, it was clear that Habitat could improve Mr. McClendon’s 1959 home even more. 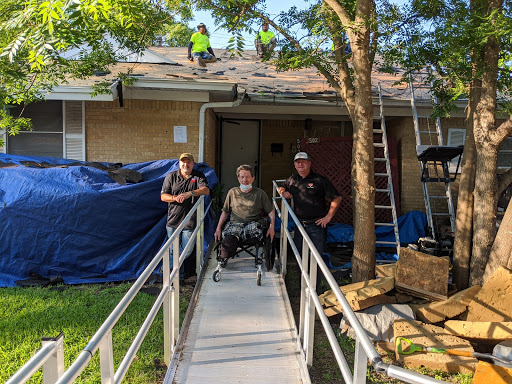 While typically HFHGG does not serve people living outside of Garland, Rawlett, or Sachse, Mr. McClendon’s Veteran/Disability case called for an exception. While COVID-19 forced the project to be postponed, the repair took a mere seven hours from start to finish on June 3, 2020. Habitat for Humanity of Greater Garland partnered with the Owens Corning Roof Deployment Program. The program aims to inspire, activate and match Owens Corning’s network of independent Platinum Preferred Contractors with military families around the country to deliver and install a free, new roof. The team was very fortunate to be paired with Outback Roofing, who provided excellent client support and did an excellent job installing a quality roof. Owens Corning donated all of the materials needed, and Outback Roofing donated all of the labor. Outback Roofing also gave the McClendons a solar powered vent on their roof which will reduce their heating and cooling costs incredibly. During construction Fox4News was able to visit the site (https:// www.fox4news.com/news/north-texas-veterans-roof-replaced-for-free), which provided the donating businesses an opportunity to advertise their kindness. Once the clip aired, another local business, TexSun Solar Screens called in to donate solar screens to the project. This roof replacement was a community-wide project that left a local Veteran and his family safe, secure, and gratuitous. The quality of the new roof system installed far exceeds the typical shingle and the McClendons can live with peace of mind and without fear of the future!

While Mr. McClendon’s living conditions are exponentially better than they were before, there is still work to be done. We are hoping to be able to remodel Mr. McClendon’s bathroom to make it more wheelchair accessible, and to eliminate other health and safety concerns in his home. We would also like to help clean up his yard to make accessing his home more accessible. These projects will require significant contributions from volunteers! If you’re interested in helping the McClendons, please contact our Repair team at peter@garlandhabitat.org! There are lots of other ways that you can help us here at HFHGG as well!. Mr. McClendon plans to volunteer with us in upcoming events, too: “I may be confined to a wheelchair, but I sure can swing a hammer.”

There was one active leak known to be occurring in the home shown above. Habitat’s condition assessment found shingle damage all throughout the 25+ year old roof.

Mr. and Mrs. McClendon were very grateful for everyone involved in making this dream come true!